(PHOENIX) — He walked into a Marine Corps recruiting station in Phoenix on his 18th birthday to enlist, only to discover his parents hadn’t told him that he was an undocumented immigrant. But this DREAMer didn’t give up on serving the only country he had ever known—he did it in other powerful ways instead.

This is the true story behind Americano!, a timely new musical opening January 29th in Phoenix, Arizona, that is poised to become one of America’s most important new works of 2020.

Americano! is based on the life of Tony Valdovinos, a graduate of Camelback High School in Phoenix who was brought from Mexico by his parents when he was two years old. Now 28, Valdovinos said the experience and process has been surreal. 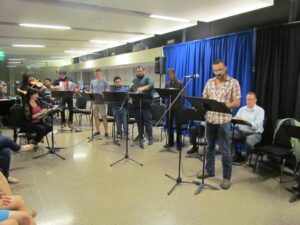 “Imagine someone calling you out of the blue and then a year or so later you hear about 20 songs involving the most important and intimate details of your life? But this journey is worth it to get people to think more about what DREAMers and their families are going through. And it will also put a smile on their faces,” Valdovinos said.

DREAMers’ are undocumented immigrants brought to the United States as children. In 2012, the Obama Administration established a program called Deferred Action For Childhood Arrivals (DACA) to give these immigrants temporary relief from deportation. The U.S. Supreme Court is expected to rule on the legality of DACA in mid-2020. The fate of DREAMers and the ideological battles around immigration are sure to be among the defining issues of the 2020 presidential campaign.

Over four years in the making, Americano! is a collaboration between The Phoenix Theatre Company and Quixote Productions, owned by Scottsdale public relations executive Jason Rose. The musical is the Company’s latest contribution to the cannon of new American theatre and is the heart of their 100th anniversary season.

The production announced Ken Davenport has joined the team as its Executive Producer of Americano!. He is a Tony Award-winning producer of several blockbusters including Altar Boyz, Godspell, Macbeth, Kinky Boots and Once on This Island.

“From the moment I heard that the story of Tony Valdovinos was going to be a musical, I wanted to be involved. Because it’s about the new American hero. And I’m thrilled to join a team of such passionate and unique voices and look forward to helping them tell this important and timely story to audiences in Phoenix, and hopefully, all over the world,” said Davenport.

Also central to the creative team is Michael Barnard, The Phoenix Theatre Company’s Artistic Director and Co-Author of Americano!. Throughout his career Barnard has directed more than 600 shows at various theatres across the country.

“I believe Americano! has a chance to be the most emotionally resonant musical to ever come out of Phoenix. That’s why the creative team wanted to hire someone more experienced in the ways of Broadway to help get us there,” Barnard said.

The music was composed by Carrie Rodriguez, a critically acclaimed singer-songwriter from Austin, Texas. Rodriguez has never before been engaged with a musical, perhaps a key reason for the novelty of the sound and lyrics.

“I was a little surprised to be approached about this work, but was intrigued and excited at the same time. I have a real passion for the subject matter and I hope people hear that when Americano! debuts,” Rodriguez said.

Her songs are being arranged with Sergio Mendoza, a native of the Arizona border town of Nogales. He is a member of the indie rock band Calexico and the leader of his own highly regarded band, Orkesta Mendoza.

The musical is co-written by Jonathan Rosenberg, a San Diego resident whose first musical, 33 1/3: House of Dreams, concluded a critically acclaimed record-breaking run there in August. Joining the creative team more recently are Fernanda Santos and Serigo Mejia. Santos is the former Phoenix Bureau Chief for The New York Times and a professor at Arizona State University’s Cronkite School of Journalism. Santos frequently reported on immigration issues while at The Times. Mejia hasserved as a choreographer and creative director for events around world, including Christina Aguilera and the Disney Channel’s Spanish-language productions Violetta and Soy Luna.

“If you care about the arts and the potential Americano! has to bring something exceptional to the national stage, we hope you will be a part of history and join us for this very special production,” Barnard said.

For more information or to arrange interviews, please contact Jennifer Parks-Sturgeon at (480) 495-3806 or by email Jparks-Sturgeon@RoseMoserAllynPR.com.