It’s a musical 81 scripts in the making.

But seven years after its start in 2015, the Arizona-birthed musical “¡Americano!” is going to New York City.

The new off-Broadway production will hit the New World Stages for its premiere on April 21. The theater, owned by the Shubert Organization, is one of the three 499 seat show halls, making it one seat short of the 500-seat Broadway theater requirement. Tickets go on sale on Feb. 17 at 10 a.m. EST.

Directed by Phoenix Theatre Company artistic director Michael Barnard and produced and conceived by entrepreneur Jason Rose, “¡Americano!” is the first Arizona-born musical to make it to an off-Broadway stage in New York City.

Jonathan Rosenberg and Fernanda Santos co-wrote the story alongside Barnard and Austin singer-songwriter Carrie Rodriguez composed the music for the show.

The show will run through June 19 with the possibility of extending the 10-week run.

Chicanos Por La Causa — an Arizona-based organization that fights against Latino oppression — is spearheading the $3 million undertaking with a $1.75 million investment.

“While our goal was always aimed at Broadway, getting there was highly uncertain and extremely risky,” Rose said. “We are now on the verge of realizing a dream and this dream would ultimately take us further into New York on even bigger stages. It would take us to road shows around the country, and shows across the world. We can’t get there without taking this step. And it’s an exciting one for the state of Arizona. It’s our shot and we are taking it.” 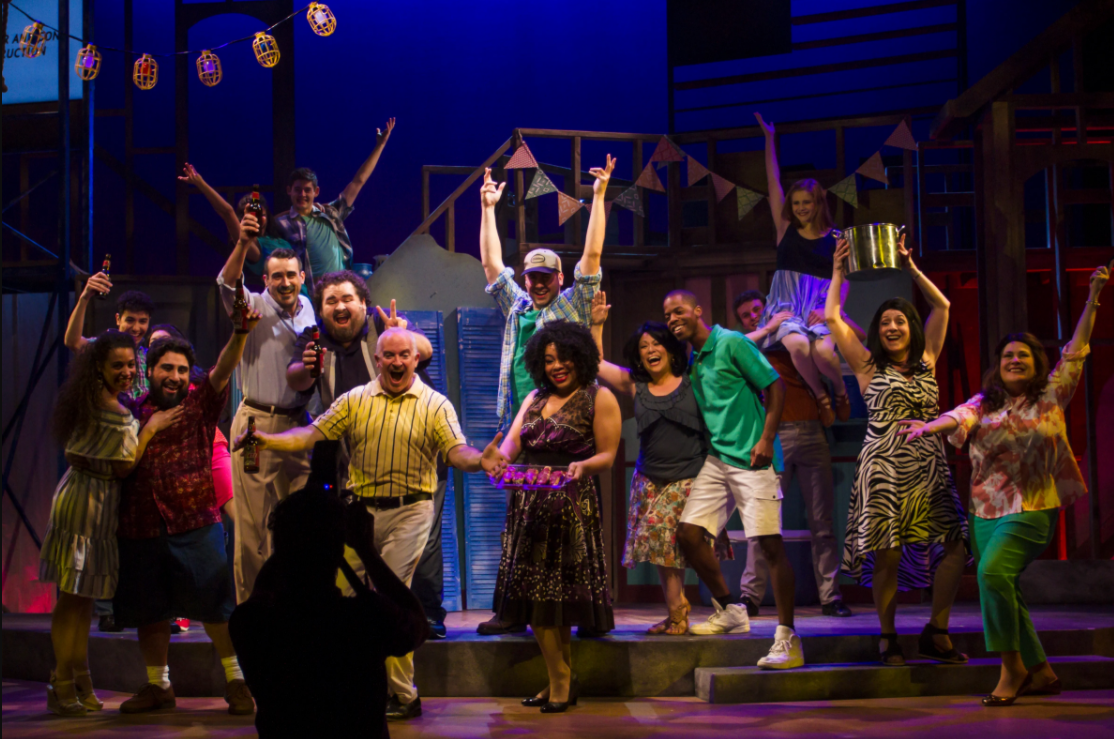 The ensemble performing “Fiesta” in ¡Americano! at The Phoenix Theatre Company. Courtesy Of Reg Madison Photography

After he saw the twin towers collapse when he was in sixth grade, Valdovinos knew he wanted to fight for his country. But when he enlisted for the marines at 18, a recruiter told Valdovinos he was undocumented.

“I always had it in my mentality that I was getting ready to do my part, which was to defend what we had, our lives, our country, the Pledge of Allegiance. Never in that time growing up did I imagine that I was not part of this country,” Valdovinos said. “I found out that day that as soon as I graduated high school, I was not going into the Marines but that I was actually going into an abyss of no opportunities.”

Valdovinos never became a Marine. But since his rejection, Valdovinos has carried a 12-year career of political efforts, in which he spearheaded the election of U.S. Marine, Ruben Gallego, to Congress in 2015. Now the president of La Machine, a political operation firm, Valdovinos is campaigning for Gallego’s reelection and fighting for Latino rights.

On Jan. 29, 2020, Valdovinos’ story hit the Phoenix Theatre Company stage for the world premiere of “Americano.” The show set box office records for an original musical during its four-week run, concluding with 10 straight sell-out shows.

“When we finished two weeks before the pandemic set in after a record-setting run, it was discouraging,” Rose said. “But when there’s a crisis, there’s opportunity. And so we kept the band together. We kept our national team together, and ultimately things started clearing up.”

Why ‘¡Americano!’ is playing off-Broadway next to Jersey Boys

In September 2021, Rose and Barnard began searching for theaters across New York City to showcase “¡Americano!.”

They didn’t find a venue.

The Shubert Organization — the company which currently operates 17 Broadway theatres and six off-Broadway venues — had an open theater at New World Stages. People from the organization had seen “¡Americano!” in its world premiere in January 2020 — and loved it, Rose said.

“The organization said, ‘your timing is impeccable,'” Rose said. “‘Do you want to go in next to Jersey Boys?'”

The show was slated to premiere in April 2022. But to put the show on the stage, Barnard and Rose needed to raise more than three million dollars in less than three months.

“It was a Herculean task,” Rose said.

It was November 2021 when the “¡Americano!” cast and crew flew to New York City for a two-week workshop to refine the musical. At the end of the workshop, the cast performed three shows.

Board members from Chicano Por La Causa  (CPLC) were in the audience. After the shows, the team met with David Adame, president and CEO of CPLC.

Since the start of the pandemic, CPLC has served more than 2.1 million people across the Southwest with offices in Arizona, New Mexico, Nevada, California and Texas. The organization helps meet the needs of the Hispanic community in five ways:  Health & human services, housing, education, economic development and advocacy.

The mission of “¡Americano!” — to share the struggles of Dreamers across the United States  — aligned with the mission of CPLC, Adame said.

“When I heard the details of the story, I said that plays out every day,” Adame said. “We need other communities understand our journey and understand our story, understand and not listen to some of the negative rhetoric that goes out there. If this thing is successful, could we have bought a greater platform to tell our community story on a national stage? The short answer is obvious. No.”

When to see ‘¡Americano!’ and how to get tickets